skip to main | skip to sidebar

In early autumn I had been falling in love with Jakops barn a lofty and tranquil structure that I came upon during a stay at the Kone residence place located in Mynämäki in the Southwest of Finland. During several days I experimented with different options to document the play between interior and changing sunlight with time-lapse cameras. The footage that originated from this study is now on display in form of an opened aluminum travel case. The downer part displays the camera view of the sunbeams slowly advancing on the wooden floorboards while the upper part shows the specks of sunlight penetrating the open panel structure of the open space.
The recorded time encompasses the play of light and shadow happening during six hours and is shown in a sequence of 8 min. 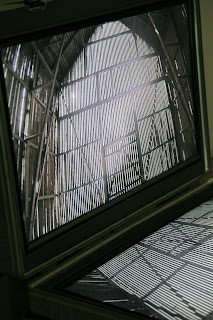 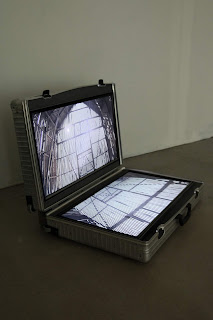 The Work displays individual video footage taking while working to break a bathroom floor due to a water accident. Two jackhammers simultaneous breaking the concrete and revealing step by step the underlying structure.
The footage is than video mapped onto a series of furniture pieces that are made of the very same material. The installation of concrete plates that were molded into steel mesh refers to the working process while elevating the working surface towards a resting place.

The nature of walls

The video is compost of seven different videos displaying the demolition of walls. Each individual wall had been pre painted with chroma green paint. This allowed me to designate these areas in the editing process to be transparent. I layered the individual footage behind each other. In the process of overlapping breaking activity the video creates a frenzy of different compositions. 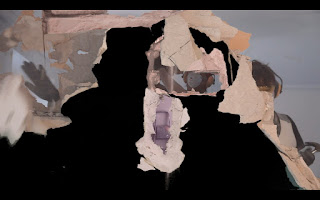 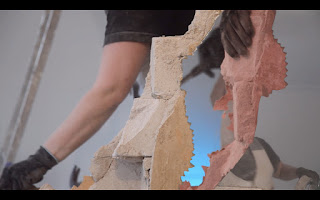 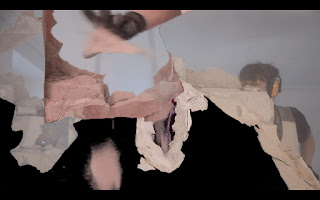 The video shows a dense clowd of black and white shapes that slowly dance across the walls and slowly desolve into single particels. The footage was shot while working with a jackhammer on an old bath tub. The white surface is the emalie and the black colour comes from the iron oxide. What was in the making a earsplitting brutal exercise turned into a mesmerizing hypnotic dance. 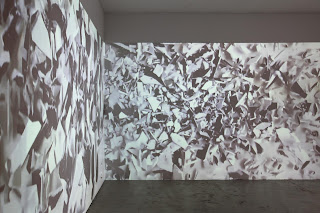 In the video I had to remove a big wall section between to offices. By just placing camera and blue light in one of these rooms and starting the breaking job this video was created. I have done similar works by painting walls with chromatic green to remove a background from the subject of a photo or video, allowing separately filmed background footage or a static image to be inserted into the scene.
This one I like because of its simplicity and powerful visual feel. 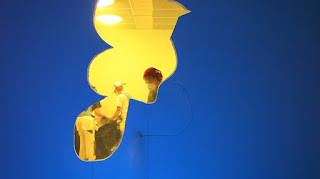 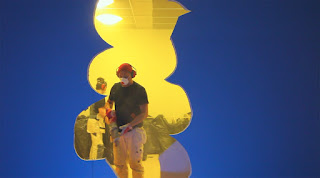 I was building a set of machines in my studio that are inspired by early methods of mechanical movements and transition. These machines are idling ahead and performing tirelessly repeating motions.
I took video of this set up and projected it here on the gallery wall. The wall was painted black but during the opening I painted certain areas to drive these shy creatures in the light. 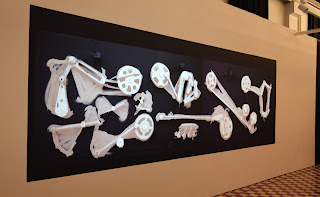 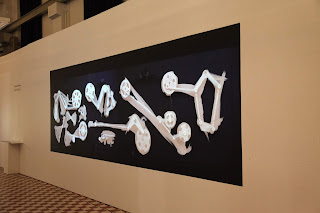 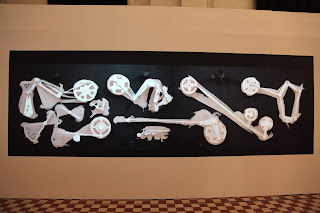 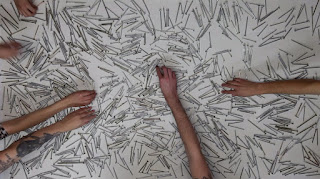 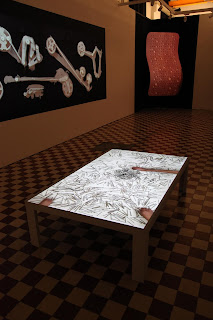 I got this idea for this work while preparing for a studio visit of 28 students from the Art academy. I was mend to let the students see how artist work in practice and to see different working methods. It’s a fact that many ideas originate from very banal activities such as sorting through material like a big box of screws that had to be sorted out. I created a setting to record this video and had everybody help with the sorting. This was done in 8 min. and interesting footage was created.
The video is projected on a table with the exact measurements of the original sorting area.

The video has been taking in the late autumn in the marina in Lapland. Against a romantic evening setting we can observe construction machines building a wave breaker. On an absurdly small path of piled up stones the machines tireless advance their path into the sea. 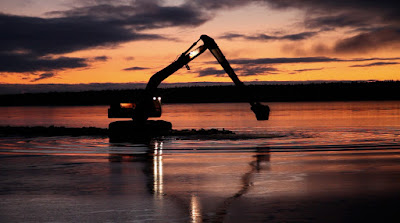 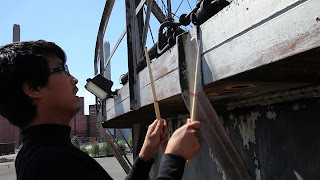 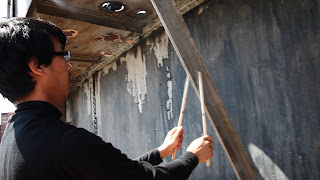 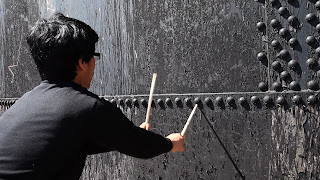 The video was filmed in the industrial setting of Suvilahti a former energy production area in Sörnäinen, Helsinki. It encompasses nine buildings and two large gasometers.
The idea was to explore the given architecture in an unusual visual and acoustic way.
I was cooperating with three members of the German progressive metal band TrueFalse
that visited me for two weeks and put their musical expertise to practice.
In Elevated Jam, the protagonist Son Pham is drumming on the steel hull of a giant gas clock. During the play he slowly elevates upwards and with the ascent also the acoustic properties of the building start to change. Reaching the top not only the scenery widens up to us but also the perception of the architecture as such. 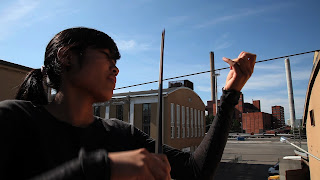 My heart is a smoking hole in the ground 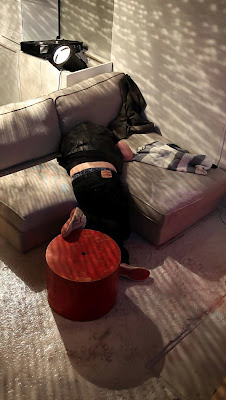 
A sole survivor of a heavy party night has passed out facedown on a sofa.
Is he happy, lovesick, broke or drifting? One can only speculate about the figure that collapsed in a way that reminded me of a central element of a classical painting composition.

The unarranged human figure stays unknown to the spectator and remains till today unknown to me. The whole scenario is a found situation that was just put into perspective by the chosen camera angle. The rotating reflections of an invisible disco balls and music beats wash over the scenery.
The tempo, pitch and complexity of the sound changes with the rotating reflections that speed up, slow down and reverse. It can be best described as to belong to the “video game genre”, consisting of electronic sounds and drum sound samples it was originally made for a TV show called Ninja for kids. For the video it was further modified.
The music was composed by Samuli Tanner one of the bright young talents of Helsinki’s musical underground and internationally probably best known as one half of the dub step production team Clouds.
Gepostet von Unknown unter 9:37 PM No comments: 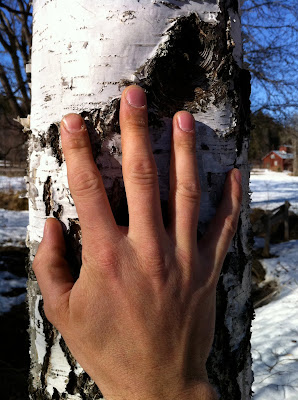 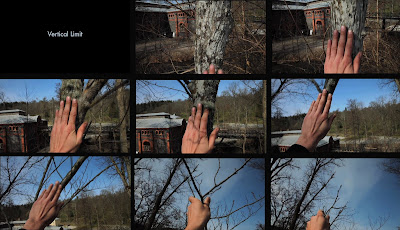 The video shows a haptic exploration of a 16-meter high tree. The protagonist in this video is a hand that travels up the bark starting from the firm solid trunk at eye level and ending at the highest most elastic of its branches. The hand is in this case not Symbol of how to manipulate the physical world, but also how to perceive it.
I took the video in one shoot and its flawless motion creates a feeling of lucidity and weightlessness. For a moment one can become a gravity defying squirrel or an ant not worrying about dimensions or just liquid absorbed by the roots and traveling through fine capillary systems towards the leaf-bearing branches.
You can see the video by following this link http://vimeo.com/user3810697
Gepostet von Unknown unter 1:57 AM No comments: 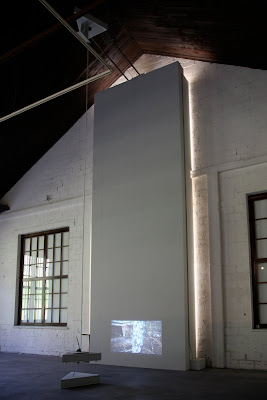 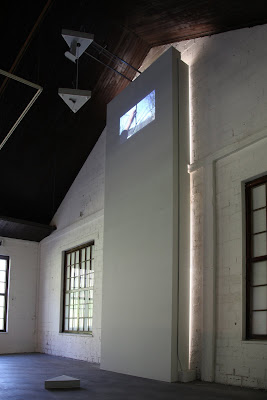 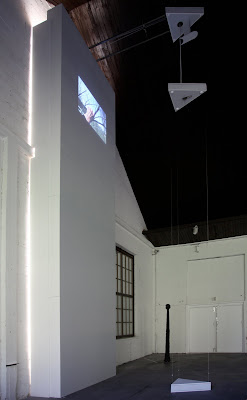 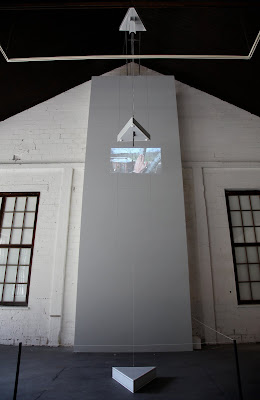 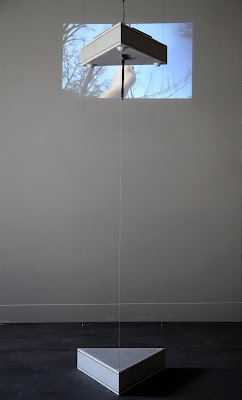 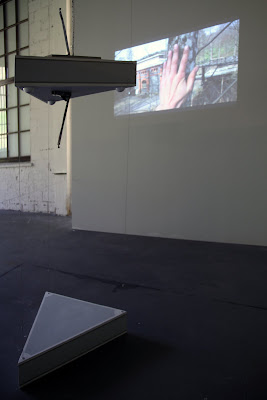 The video/kinetic installation “Vertical Limit”, takes the same named video work to the next level. I always wanted to create a symbiosis between moving image and kinetic movement. The footage of the former mentioned work was used in combination with a kinetic set up. A lofty space at the summer exhibition “Tilallisia paikkoja/Spatial places” in Fiskars 2011 was the perfect setting to mount this experiment. The height of the space offered the opportunity to play with the vertical dimension. In the height of eight meter I installed a devise that could lower and rise a triangular “beamer pod”, thereby constantly traveling up and down between to likewise forms
On the floor, centered and 250/300 cm into the space is a triangular concrete block from witch three steel wires went up to the ceiling. These wires are guide lines on witch the video projection devise went up and down by means of an microchip controlled industrial motor. The projector rises and sinks in five min. intervals and according to this rhythm the movement in the video is synchronized. To antennas on the top and bottom give signals to the motor as well as to the Hdmi box when to switch to the right video file.
The installation worked flawless for about a month but had to be shoot down because of a hardware error (cable tranmission). Nevertheless it will be debugged for the next show and I am quite confident it will improve with this changes. The work can be customized for any room and location that provides a ceiling height of at least 450 cm.
You can see a video of the working installation under http://vimeo.com/30894936
The project was realised in colaboration with Gregoir Rosseau (rousseau.fi), who supported me not only with technical expertise, but put a lot of personal time and vision into this installation.
Gepostet von Unknown unter 11:01 PM No comments:

From then till now.